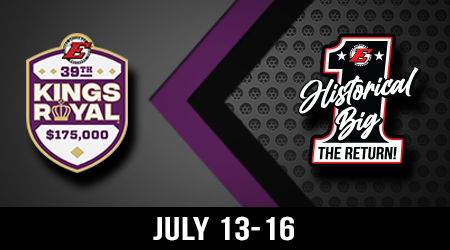 JULY 13: JOKERS WILD
JULY 14: THE 12TH HISTORICAL BIG ONE
The HBO returns as a regularly scheduled event on the Eldora slate for the first time since 2003. The original $100,000-to-win sprint car race will once again pay six figures to win. Other purse highlights include a $25,000 runner up prize and a minimum starting pay of $4,000. Wednesday’s Jokers Wild action features a full points paying World of Outlaws event.

JULY 15: THE KNIGHT BEFORE
JULY 16: THE 39TH KINGS ROYAL
The 39th Running of the Kings Royal is back with a staggering $175,000 winner’s prize. Positions two through 24 will see substantial increases in payout, including a minimum of $5,000 to every Feature starter. Friday’s Knight Before action features a full points paying World of Outlaws event.